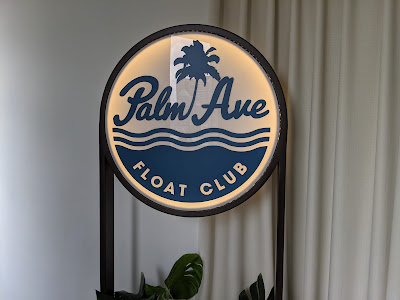 I received a gift card from my sister for Christmas last year. It was for a 60-minute float at Palm Ave float club for my hubby and myself. We delayed our trip to the float club for several months due to covid-19 but finally decided to go down and utilise the facilities.

We took a cab down to Kallang River Side Park and what looked like an old building in the middle of nowhere was charming when we entered. We were a little lost, but the kind restaurant staff from the Raw Kitchen Bar on the first floor guided us to which lift to take. When we reached the Float Club, we were greeted by a scenic view of Kallang River Side Park; the sight of old banyan trees and tranquil waters from the windows1 just gives you a sense of relaxation and peace.
  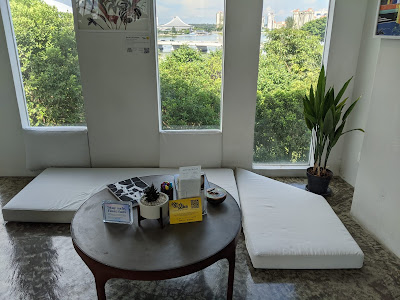 Floatation Therapy Benefits- When a blissed-out state is attained during floatation therapy. It can improve mental clarity, creativity, and problem-solving abilities. Other benefits of deep relaxation are better sleep and muscle repair. Epsom salt is used in the pod water. The solution is beneficial for your body and mental health.
Things you must note before going for Floatation Therapy- As much as possible, you might want to refrain from shaving before heading down for a floatation therapy session. As the saying goes adding salt to a wound. Shaving might cause micro-cuts, and it will really hurt once the saltwater seeps into an injury and stings. However, the club does provide you with packets of Vaseline, which you can use to seal up any nicks, cuts, or wounds before soaking. Dyeing your hair before soaking is also not advised because the hair colour may run. 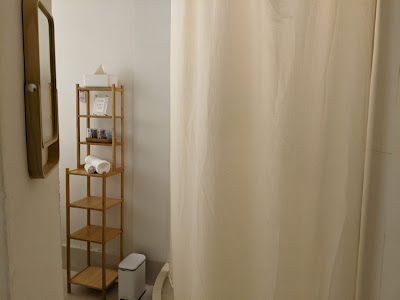 The staff was very efficient and friendly, and after checking in via safe entry, we were guided to our floatation rooms. The pods were huge! The team showed me all the facilities in the room, like the shower area and floats for the neck because, during floating, some may feel straining their necks, so the float was provided to ease the tension allowing you to fully relax. The water is deep enough to allow you to float, but the depth is nothing to worry about for people like myself who aren’t good swimmers. There are earplugs available to prevent salt from entering your ears. There is also a button within the pod that you could press for assistance from the staff. 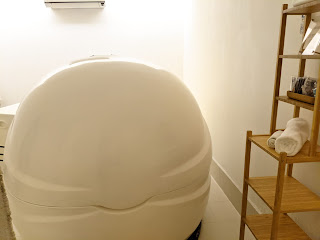 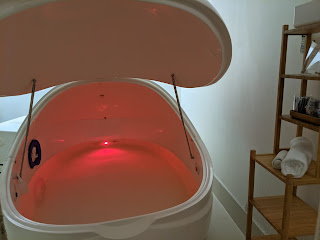 I started my floating session with a shower before heading into the pod; it is important to cleanse yourself, removing any oil from your hair and body which might create a distracting bubbling sensation. I did not close my pod because I didn’t like the claustrophobic feeling small spaces give me and because I was told that one of the hinges of the pod wasn’t working well. I did not want to risk being stuck in a pod of water.

The warm water has a calming effect. There is relaxing music at the beginning and ambient lighting before it is lights out, and the music stops allowing you to fully relax. To be honest, I began my first couple of minutes playing with the water and enjoying the fact that I could float. I tried a few positions before I could relax for the rest of the hour. The music and lights turned on when the hour was up, so I hopped out of the pod to get a good shower to remove all the salt off my body. The salt crystalises once it dries, so make sure you wash thoroughly. 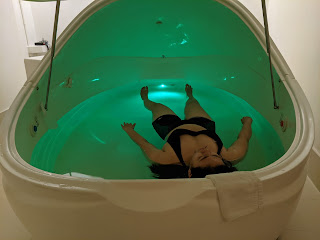 Hubby was in a separate room and did enjoy his float session. Would we like to go back for another float? Most likely, no, don’t get us wrong, it was enjoyable but at a slightly pricy range of SGD$89.00 an hour for a single float, but it makes a good gift idea for someone you know needs to relax and enjoy this experience. 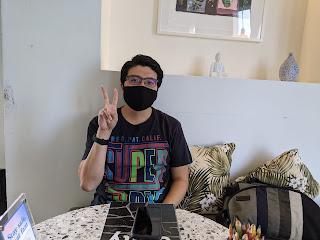