I was firm when it came to deciding on hiring an emcee for the wedding banquet as I didn’t want to put my friends on the spot to read from a script which sometimes can get pretty awkward. I have been to banquets where you have the emcees randomly popping in and disappearing or worst forgetting their script and going off the point.

Skills of an emcee –A professional emcee is able to gauge the mood of the guest, keep the flow of the event smoothly as well as keeping track of time. All in which are highly important skills in hosting which are needed for a successful event.

Bilingual masters of ceremonies – I prefer to have just one emcee instead of 2, so an emcee that is bilingual in both Mandarin for dear’s side of the family and in English for my side of the family would be great. Being able to switch smoothly from Mandarin and English without repeating the same phrases in both languages is truly skilled.

How to find the best freelance emcee in Singapore – I found that many other emcees charge a very high rate perhaps due to their popularity. There are a couple of emcee agencies in Singapore namely Merry Bees, https://emceelester.com/ etc., try to get a reputable company that has google reviews as I feel that they would have better accountability of their standards. I found my emcee on Carousell her username is eventemcee1 her name is Felicia, she had many good reviews and I was very impressed that many indicated that she was very helpful and always went out of her way to help out during the event. I found that her charges were very reasonable.

I arranged to meet up with Felicia where we discussed the details of the event. She was very professional she gave us some sample scripts and said that she would get back to us in two weeks’ time with her script for our banquet. After going over the script and settling on the final details we paid her 50% of the total bill the other 50% was to be paid after the event or on the day itself.

Felicia also assisted with speaking with the banquet manager at the hotel to let him know what was needed at a certain time. The banquet concluded at 10 pm sharp without a hitch all thanks to Felicia. All my guests left the banquet to seem to enjoy themselves greatly even the kids who had a great time blowing bubbles when Felicia challenged them to blow more bubbles during our walk-in. I did away with the second walk-in as I found it unnecessary Felicia always took cues to what we wanted and seamlessly make the evening flow well.

Felicia was an amazing, friendly, amusing host for our wedding dinner banquet. She was proactive in coming up with ideas for our “love telepathy game” during the banquet and was very humorous as well, the guests enjoyed her jokes. Seamlessly switching between English and Mandarin, Felicia is an eloquent host as well, creating an atmosphere that was both fun and classy. 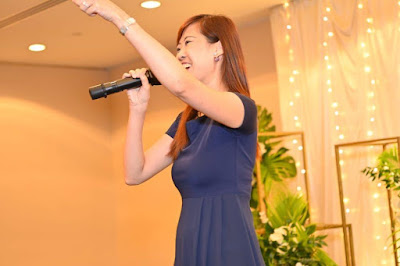