Eveclair
Share
A few days before one of my trips to Bangkok, my elder sister suggested a husky cafe she got to know of to me. Being an animal lover, visiting the husky restaurant was definitely added to my itinerary.

We took the BTS to Ari station and walked to the shell gas station. From there, we took a cab to the cafe, located within a private housing area. Locating the restaurant was simple because many bloggers have blogged about the directions. My bf and I followed the instructions,, and we had no problem finding the place.

Upon our arrival, we were greeted by the staff, and they introduced the available packages. We opted for the cake or ice cream and drinks package as we had lunch before we came to the cafe. 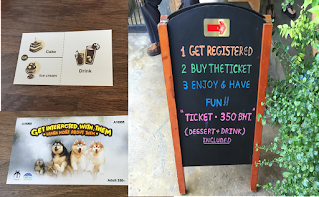 Whenever I first enter any animal-related business, I look out for how the animals are treated and for any signs of abuse. Still, I am happy to report that the dogs are very well cared for. The owners were previously husky breeders, and from their interaction with the dogs, one could tell that all was well. 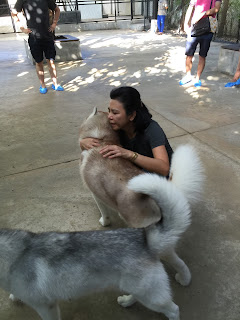 Thailand is a tropical climate, which isn’t ideal for the huskies; I fear not, as the responsible owner kept the dogs in air-conditioned rooms the majority of the day and allowed them out only an hour or so each time. Ice water is also given to the dogs to help keep their temperatures down. 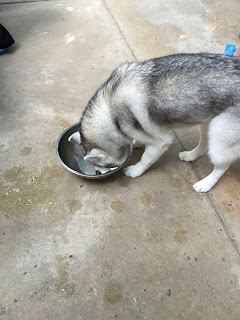 Before entering the enclosure, for hygiene purposes, your hands must be washed, and plastic footwear similar to gear used for infection control in hospitals was given to us.
Playtime with the dogs was excellent; they were rather shy but friendly; the dogs were separated into 2 groups due to the male dogs competing to be the alpha of the group. The irony is when food is served, tension among the dogs is forgotten, and the only food is their primary focus. 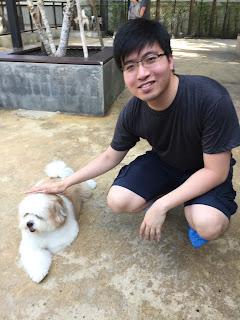 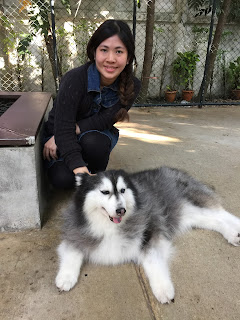 It was a fantastic experience stroking and cuddling up to the huskies; a few other breeds of dogs mingle amongst the pack, which is pretty interesting to watch. It was also quite an eye-opener to see the huskies snacking on chopped carrots, which the owner gives as treats. 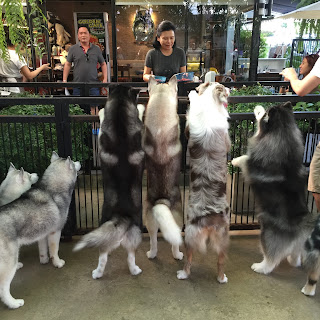 Amidst playing with the huskies, I noted one particular dog was drawn to the cameramen of a local television station. Licking and cuddling up to the poor gentleman who was trying his utmost best to focus on his job, filming the interview. He gently patted the dog and smiled. I guess the dog got the cue and snuggled beside the cameraman, looking disappointed.

Little did I know that I would be interviewed next by the television station. The show’s host asked questions like where I was from, who I came with and do I like dogs… Haha didn’t expect to get 5 minutes of fame during my holiday. After the interview, we exchanged name cards and had a short chat. An enjoyable experience. 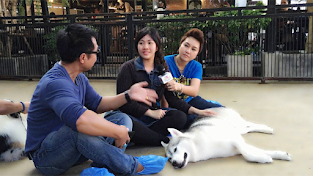 After the hour was up and the dogs were called back for meal time, we headed to the gift shop. Where I purchased a t-shirt. The owners were very kind to call for a tuk-tuk for us to make our way to the main road. 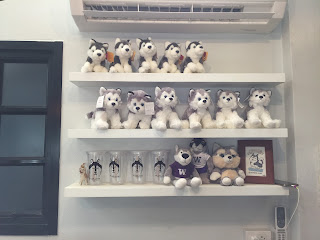 My, I had a delightful session with e dog at the cafe. Not a massive fan of the cakes but the dogs and hospitality the owners provided were true.

Could anyone tell me which television station this is? The crew were in a rush, and I didn’t have time to ask them. 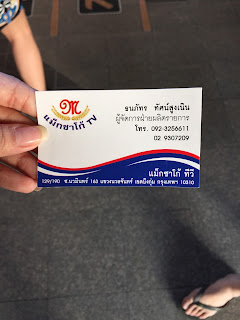